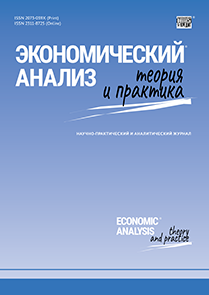 Предмет. The article considers the main turnover ratios of the twenty five leading publicly traded oil and gas companies from 2006 to 2018.

Цели. The purpose is to determine the current values of the main turnover ratios of leading publicly traded oil and gas companies, to identify the key trends in their change within the studied period, to establish those factors that led to this transformation.

Методология. The study rests on methods of comparative and financial-economic analysis, and generalization of materials of consolidated income statements.

Результаты. The analysis of annual reports of 25 oil and gas companies enabled to determine the dynamics of changes in key turnover indicators in the stock market sector of the industry and establish the main factors that contributed to this transformation. The study period revealed a significant increase in the duration of asset turnover. The reason for such results was that the increase in the balance sheet valuation of assets outstripped the growth in net revenue. It turns out that invested capital began to take much more time to return to the industry company as net revenue from core activities. An insignificant reduction in the cash operating cycle was established, which was facilitated by an increase in the duration of payables turnover, which occurred against the background of a slight decrease in the receivables turnover time. The paper unveiled an increase in the inventory turnover period, which negatively affected the duration of the cash operating cycle. It also established that, despite the efforts of leading publicly traded oil and gas companies, the duration of asset turnover and the cash operating cycle increased quite significantly at the height of the global financial and industry crises.